Facebook: 4x more relevant than telecoms players? The loss of the network effect 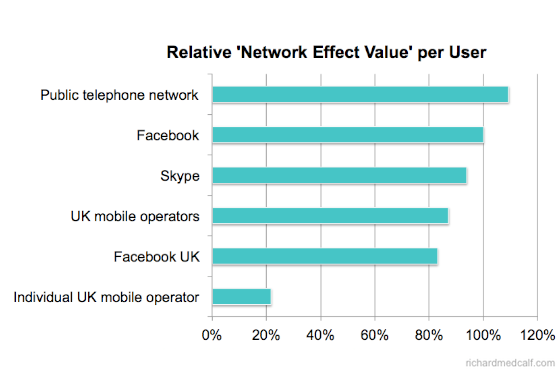 The value of a network

The value of a general communications network has traditionally been estimated, using Metcalfe’s law, to be proportional to the square of the number of users. However, Andrew Odlyzko and Benjamin Tilly disputed this approximation on the basis that Metcalfe’s law assumes every connection between two users is equally valuable. By reasoning that adding extra connections follows a law of diminishing returns to each user, they make a strong case that, as a rule of thumb, the value of a network for an average user grows as log(n), resulting in an overall network value of nlog(n) rather than the n^2 assumed by Metcalfe.

This value per user is an important measure of the potential importance of a particular network to its own user base: the value of being able to communicate with other users in the network.

The actual importance will depend on a number of practical factors: the ease of locating correspondents within the network and establishing a communication with them, the richness and quality of the communication medium, the price, and so forth. But these areas are tactical concerns to be addressed by execution, whereas the potential value of a network to its users is a strategic factor: an asset and platform for value creation.

In this context it is interesting to estimate the relative value per user of a number of service provider and ‘over the top’ networks. The graphic above shows the results of my calculations for:

The results are enlightening:

This helps explain why service providers are failing to deliver substantial innovations in the realm of personal communications. An individual UK mobile operator, for example, may decide to roll out a new communications service for its users (for example, photo sharing, or high fidelity voice calls). The value of such a service will be proportional to the value the user attaches to the service provider’s on-net users. The figure above demonstrates clearly that users would find the same service 4–5 times more attractive if rolled out by Facebook.

Service providers have historically been the guardians of the ‘network effect’; International bodies set standards that were rolled out ubiquitously. The effects of this remain today: the network effect of the public telephony network is still the greatest in the world.

In the Web 2.0 world, with users increasingly using web tools to collaborate and communicate, service providers are faced with a dilemma. Standards bodies will not be able to identify develop and roll out new services at the required speed; and communications innovations rolled out across an operator’s own on-net user base (such as high-fidelity voice calls, for example) will likely fail due to the low network effect that such providers can muster compared with their OTT rivals (as illustrated by Figure 1).

If telcos want to play in the A.C.E. Space, there are three main avenues for telcos to pursue in order to capture a meaningful network effect:

For executives at many Service Providers, used to regarding their peers as competitors, the idea of collaboration will come with some difficulty. However, as Web players develop an ever-stronger network effect independently of network footprints, service providers should work together to collectively grow their addressable market, rather than simply fight each other for a share of a diminishing pie.

In the wake of many failed “telco collaborations”, is this vision of SP partnerships an unrealisable dream? Or could telcos find a new way to work together that avoids the mistakes of the past?