Last week’s rumours that Google has signed reseller deals with Sprint and T-Mobile to become a Mobile Virtual Network Operator (MVNO) confirms something I’ve thought for a while.  Telecoms service will be increasingly sold by the Internet giants. Here are three reasons why. 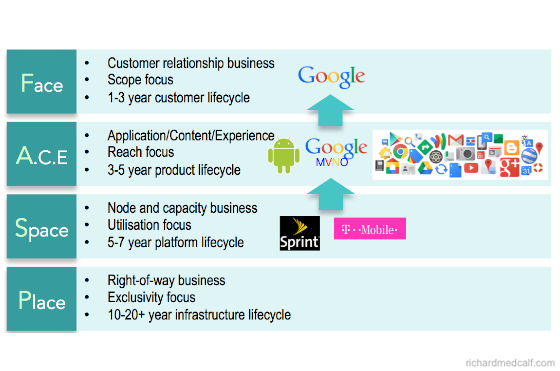 We know that Google has entered telecoms before with fibre service in selected US markets.  That seems mainly intended as a provocation to get US telcos to step up and improve access networks more extensively: a small bit of disruption to get incumbents off the couch and investing.  There are indications that Google views the MVNO project in a similar way: an experiment to get carriers to step up and improve their service.

However, retailing a service from the existing providers (Google MVNO) is very different from threatening to enter the infrastructure market (Google Fibre).  Google Fibre is a provocation; Google MVNO seems to me to be an ‘experiment’ in the sense that all Google products are experiments: a beta to test market response.  Here are three reasons why the deal makes a lot of strategic sense, and why we could see a world where your mobile device from Apple, Amazon or Google comes with mobile service bundled in.

Using the FASP4 framework, we can see that Google is an “A.C.E.” (product) company, driven by product innovation.  However it is also clearly a “Face” (retail) firm, driven by economies of scope (hence the growing and somewhat bewildering array of Google services).  However the big problem with the “Face” (retail) business is that it garners very little in the way of retail (end-user) revenues: some premium services, Google Play transactions, and some Google App subscriptions. Most of Google’s money is made in the A.C.E. (Product) business via advertising.

Selling telecoms service brings another product into the fold.  It’s also a high value product with recurring revenues and a direct billing relationship.  All great things for a retail business.

2. It’s an offer too good to miss for the right telco

Google’s brand and strength in mobile via Android means that Google is in a great position to bring significant traffic volume to its wholesale carrier partner.  The carrier, playing in the “Space” layer of FASP4, is driven by economies of utilisation.  Therefore the prospect of lots of wholesale traffic is very attractive for a carrier with below-average market share (like T-Mobile and Sprint, who just happen to be the partners involved).  Incremental revenue at very low incremental cost.

There are bound to be concerns amongst the carriers that they are letting the wolf into the sheep fold, and apparently this deal had to be signed off at the highest level in the carriers concerned. But for a third- or fourth- placed carrier, the deal is going to feel too good to miss. Especially given the ‘prisoners’ dilemma situation that if anyone is going to make the deal, it’d better be them.

3. It acknowledges that telcos have failed to expose the value of the network

For years, telcos have tried to monetize the value of the network either through building their own services (at the A.C.E. layer of FASP4) or by exposing functionality for other players to harness.  Neither of these strategies have been successful. But, there is value in the network, and there is value in controlling the entire customer experience from retail through applications to connectivity.  It’s the part missing from Apple’s stack, and we can be sure it’s on their radar too.  Internet giants, coming from a position of strength in the higher layers, can integrate and extract the value from the network to an extent that telcos, working upwards from connectivity, have failed to do.

There is value in the network and in the billing relationship that Internet players can perhaps harness better than telcos themselves. The barrier to successful retail telecoms might have just got a lot higher.

Do you think that Apple, Amazon and Google will become significant telecoms service retailers? Leave me a comment or drop me a line with your thoughts.