Cisco’s industry-reference Visual Networking Index (VNI) report came out this week. How have expectations for Internet traffic growth evolved since last year? Here are 3 key changes since 2013 to take away. More next week! 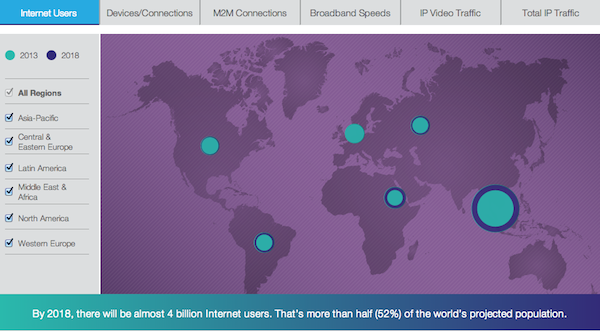 The VNI is an ongoing Cisco initiative to track and forecast the impact of visual networking applications, and is an ubiquitous reference throughout the telecoms and technology sector for understanding traffic growth around the world.  I’ve seen it used by executives and traffic planners alike in many, many telecoms operators.  The VNI has been around for several years now and the methodology is bedded down, involving a solid five step approach (see footnote to this post for more details).  Now, it does have its detractors, but I woudl say that the VNI is a bit like democracy… it might not be perfect but it’s definitely the best we’ve got, so I thought I would spend a couple of posts digesting this year’s findings.

In this post, I will summarise how this year’s Cisco VNI report differs from last year’s. In the next post in the series I will assess the broader implications for the telecoms industry.

When the 2013 VNI forecast was published a year ago, global IP traffic was predicted to grow 28% in 2013 from its base level of 44 exabytes per month in 2012.  However, the 2014 VNI report shows only a 17% growth rate in 2013, with traffic reaching 56 exabytes per month in 2013 rather than 51 as predicted last year.  Weakness mainly came from the fixed Internet segment, as the chart below shows. 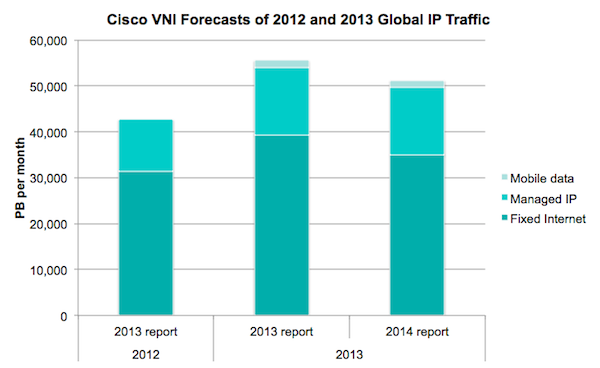 North America was the main surprise, but all regions showed some weakness

In 2012, the Cisco VNI showed that North America was the largest region in terms of IP traffic, representing 33% of the total or 14.4 exabytes per month.  Its growth in 2013 was only half of the aggressive levels predicted last year, and this appears to be the major influencing factor on the 2014 VNI forecast. See the chart below for the detail: 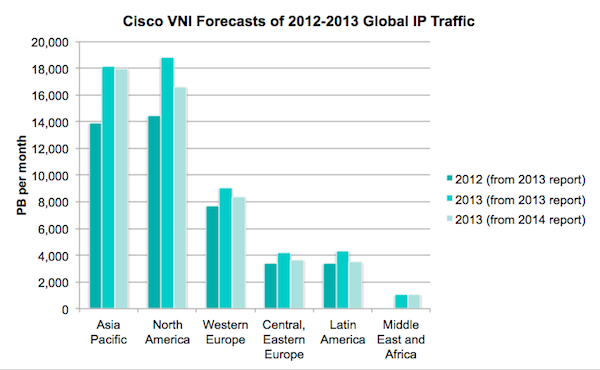 The forecasts remain very consistent – but time will tell

Overall, the forecasts remain consistent, with no big surprises in the overall growth rates expected.  Overall, the reset in expectations in 2013 has simply pushed back the curve slightly – just under 6 months according to my calculations. See the chart below: 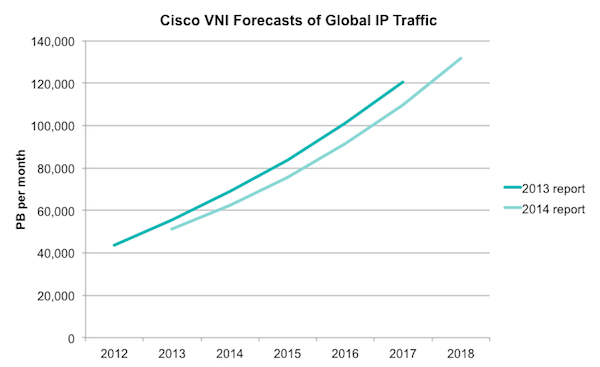 So – disappointing growth in 2013 according to the Cisco VNI / Visual Networking Index, but expected future growth remains stable.  The question that remains is: is the slightly depressed growth in 2013 a one-off, or will this continue in future years and impact the five-year forecast?

In my next post on this subject, I will draw some specific insights and actions for service providers, based on the Cisco 2014 VNI report.

For those who are interested, here is the summary of the methodology,quoting from the Cisco Visual Networking Index (VNI) report:

Disclosure: I work at Cisco. However, like anything on this blog, all analysis is my own personal interpretation and not necessarily that of Cisco. Furthermore this analysis is based entirely on publicly availably information.